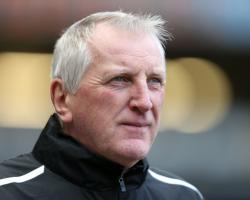 Rovers tame ShrewsJunior Brown's first goal for Tranmere helped Rovers brush aside their off-field problems and boost their hopes of League One survival with a 2-1 win over fellow strugglers Shrewsbury.Brown netted five minutes from time to hand the Prenton Park club a second win on the bounce - just days after Ronnie Moore was sacked as manager for admitting a breach of the Football Association's betting rules.Max Power had put the hosts ahead but Paul Parry levelled for the Shrews, before Brown's winner saw Tranmere move clear of the drop zone.Rovers had a penalty appeal turned down when Ryan Lowe's fourth-minute shot appeared to hit the arm of Shrewsbury skipper Tamika Mkandawire.But Power sent home a looping header from Jean-Louis Akpa-Akpro's deep cross to put the home side in front 19 minutes in.Shrewsbury's Luke Summerfield almost scored the unlikeliest of equalisers when he struck an audacious free-kick from just inside the Tranmere half

His shot drifted wide of the post by inches with goalkeeper Owain fon Williams looking beaten.Parry pulled the visitors level though when he headed home from the edge of the six-yard box 17 minutes from time.But Brown climbed off the bench to have the final say, finishing with a low shot after being found by Power