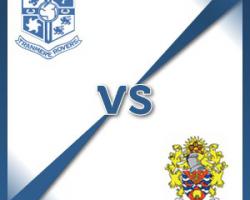 Tranmere V Dag & Red - view commentary, squad, and statistics of the game live.Adams hopes for triple boostTranmere boss Micky Adams hopes to have a triple boost on the injury front ahead of Dagenham's visit to Prenton Park.Midfielder Rob Taylor (hamstring), winger Jennison Myrie-Williams and forward Rory Donnelly (both knocks) will all be assessed in the build-up to kick-off with Adams keeping his fingers crossed over the trio's availability.Josh Thompson (concussion) was an unused substitute in midweek along with Liam Ridehalgh (back), but both Matt Hill (Achilles) and Marcus Holness (knee) remain sidelined.Striker Cole Stockton had his operation on a hernia problem this week and he is still some way off a return to action.Dagenham have doubts over goalkeeper Mark Cousins after he was forced off against Hartlepool on Tuesday.Liam O'Brien will deputise if Cousins does not recover after colliding with a post in the 2-0 win."I was happy to step up on Tuesday night, it was good to get a chance, but it wasn't in the best circumstances

Thankfully Mark is alright," O'Brien told the club's official site.Abu Ogogo is also a doubt for the Daggers after missing the midweek win