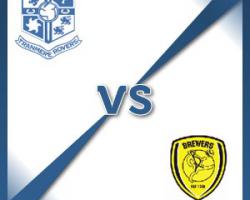 Tranmere V Burton Albion - view commentary, squad, and statistics of the game live.Jennings banned for RoversSteve Jennings is suspended for Tranmere's clash with table-topping Burton and the hosts also have concerns over another three players.Midfielder Jennings was dismissed in the midweek win over Cambridge and sits out a one-game ban for Micky Adams' men.Dan Gardner, Rovers' match-winner on Tuesday night, has a knock, Michael Ihiekwe is nursing a dead leg and Danny Holmes may miss a second straight fixture with his knee problem.Adams is already without Rob Taylor (hamstring), Jason Koumas (hamstring), Cole Stockton (hernia), Marcus Holness (knee), Matt Hill (Achilles) and Josh Thompson (head).Burton battled back from a goal down and a man down to snatch a dramatic 2-1 victory against Southend in midweek - but extending their lead at the top of the table came at a cost.Callum Reilly and Adam McGurk came off injured during the first half on Wednesday night before Robbie Weir was sent off as half-time approached.Albion, now five points clear at the summit, will assess Reilly and McGurk while the club plan to appeal against Weir's red card for violent conduct

Should the appeal fail, the midfielder will begin a three-match suspension.Florent Cuvelier (hamstring) and Mickael Antoine-Curier both missed the Southend game through injury but could return for the trip to the Wirral

However, Kelvin Maynard (hip) and Stefan Maletic (hamstring) will probably remain out